The World Youth Day Commissioning Mass Jan. 12 at Divine Providence
Church for the group of people traveling to Panama was a festive liturgy
which began with a procession of flags and song and dance from the
enthusiastic young adults.
Archbishop Gustavo García-Siller, , was the presider at the Mass,
which was concelebrated by Auxiliary Bishop Michael Boulette, who will
be traveling to Panama as well. Also, there were three Missionhurst priests
at the altar: Father Ryan Carnecer Zamora, CICM, pastor of the host parish
Divine Providence; Father Frederic Mizengo, CICM, pastor of Sacred
Heart; and Father Gilbert Obin, CICM, who is in residence at Divine
Providence.

Divine Providence is taking a group of 25, which includes parishioners, youth, young adults, parish staff, and family members, along with representatives from a number of additional churches, such as
St. Luke’s, Annunciation of the Blessed Virgin Mary, Little Flower, Sacred Heart, Our Lady of Perpetual Help.
World Youth Day with Pope Francis is an international gathering of young people which was begun by Pope St. John Paul II in 1985. Ordinarily held sometime in the summer months, this year it is taking place Jan. 22-27, to avoid Panama’s rainy season.
The theme for World Youth Day is Mary’s fiat from the Gospel of Luke: “I am the servant of the Lord. May it be done to me according to your word.”
Pope Francis will be in Panama through Jan. 29. On January 25, the pope’s schedule will begin with the celebration of a penitential liturgy with young
detainees at a juvenile detention center and in the afternoon, he will lead the Way of the Cross for the young people of World Youth Day in Santa Maria La Antigua field.
The next day will begin with Mass with local priests, consecrated, and members of lay movements. At this there will be a dedication of the altar of the Cathedral Basilica of Santa Maria la Antigua.
That day Pope Francis will eat lunch with the seminarians of the Major Seminary of San Jose, followed by a prayer vigil with youth in San Juan Pablo II field in Metro Park.
His final day, Sunday, Jan. 27, Francis will celebrate Mass for World Youth Day at 8 a.m. in the same park as the prior evening’s prayer vigil.
He will afterward visit a home for the needy, called “Good Samaritan House,” where he will lead the Angelus. His final speech will be in a meeting with the volunteers of World Youth Day in the Rommel Fernandez
stadium before departing Panama for Rome, where he should arrive shortly before noon Jan. 29. Pope Francis will give a total of seven speeches,
three homilies, and one Angelus during the five days he is in Panama.

Column: Caring for the elderly 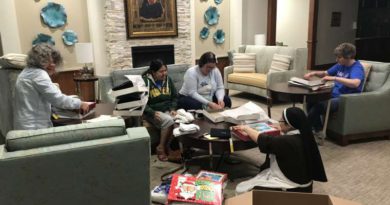 ‘They inspire us every day’: Carmelite sisters serve women with disabilities in new home 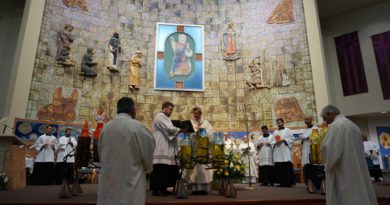