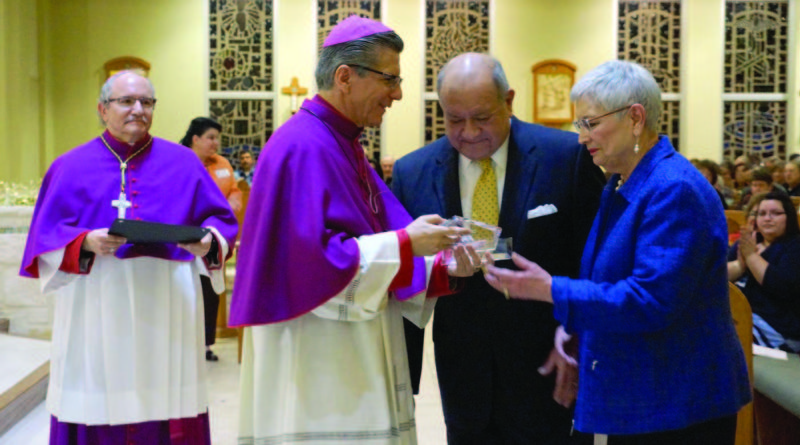 The 2019 recipients are Ruben and Verónica Escobedo.

Verónica spent 35 years with San Antonio Express-News, where she served as vice president of community relations and president of the Express-News Charitable Foundation. Verónica was responsible for the Express News’ philanthropic efforts, both monetary and in-kind support.

She currently serves as president of the Our Lady of Grace Church Pastoral Council and is president-emerita of the San Antonio-Mexico Friendship Council.

Ruben, now retired, has more than 50 years of experience as a certified public accountant (CPA), business executive, and community leader. Ruben served as chair of the Audit Committee on the Board of Directors for Cullen/Frost Bankers, Inc., on the Board of Director for CST Brands, Inc., and is a past director of Valero Energy Corporation.

Ruben is founding chair of the San Antonio-Mexico Foundation for Education and serves on the Executive Committee of the Board of Directors for the United Way of San Antonio and Bexar County.

Ever since Veronica graduated from Our Lady of the Lake University in 1965, she has found a way to serve. Veronica and Ruben generously contributed to the rebuilding of the historic Main building, which sustained millions of dollars in damages from a four-alarm fire in 2008. “I give back,” said Veronica, “because I’ve been very blessed.”

Veronica learned to give from her parents, who learned from her grandparents. Growing up with two siblings in Rio Grande City, only a few miles from the Mexico border, Veronica watched as Gabriel and Feliza Salazar welcomed Mexican children into their home, one at a time.

One boy, Paco, would cross the border, spend the week with the Salazar family and go to school. On weekends, he returned home, often with money. The family shared food, clothes and a bedroom with Paco. Gabriel ran an auto parts business and employed the boy.

After Paco, the family took in a Mexican girl who had been molested by her father. Veronica’s parents baptized her and taught her catechism classes. “My parents taught us to share our blessings,” Veronica says.

The family creed: Use things and love people. Don’t use people and love things.

Veronica’s grandparents lived the creed in Alice. There, they cared for the homeless and made a lasting impression. One place of learning bears their name: Salazar Elementary School. The spirit of giving goes back multiple generations.

Veronica felt the tug of that spirit at Our Lady of the Lake. Under the shepherding hand of the Sisters of Divine Providence, she learned about life, faith and service. “The nuns taught me how to live, how to earn a living, how to be prepared for all occasions,” Veronica says. “The motto was ‘Be gracious, be graceful, be grace-filled.’”

A lover of languages — she majored in Spanish, minored in English — Veronica wanted to work for the United Nations. But her father thought it improper for an unmarried woman to leave home — except to attend college.

Still, she found a way to use her gifts. In the late 60s, Veronica became a translator and interpreter for the Greater San Antonio Chamber of Commerce. Later, she became the secretary to the publisher of the San Antonio Express-News. In 1973, she began a column, “Dedication Rewarded,” a popular series that highlighted the extraordinary deeds of ordinary people. Nine years later, she launched the newspaper’s community relations department — the first of its kind in the United States.

She rose to vice president at the Express-News and became a charter member of the San Antonio Women’s Hall of Fame in 1984. Two decades and much acclaim later, Veronica retired from the paper but never retired from giving. She has served on numerous boards and led many fundraising campaigns, including the annual Catholic Television of San Antonio Leadership Luncheon.

A native of Floresville, Ruben received a bachelor of business administration degree from St. Mary’s University. He began his practice of public accounting with Price Waterhouse in New York and, in addition to his corporate work, is the former senior partner of Ruben Escobedo & Co., CPA, where he managed his own company for 30 years.

In addition, Ruben was employed by Handy Andy, Inc., a privately owned regional grocery chain, where he served as president from 1973 to 1977. He managed and expanded the retail business to 42 stores and annual sales of $250 million.

When Ruben was a student at St. Mary’s, he often turned to Assumption Chapel in Reinbolt Hall for a place to reflect.

“I spent a good deal of time in prayer prior to my examinations,” he said. “But I also prayed for professional guidance. What would God have unfold for me?”

He and Veronica generously supported the recent renovation of that space through The Ruben M. Escobedo and Veronica Salazar Escobedo Charitable Fund of the San Antonio Area Foundation.

“Fifty years later, I realize how pivotal St. Mary’s and the Marianists were in my life, and eventually in my family’s life,” he observed. “This was a way for my wife and me to thank the Marianists for all they have meant to the Escobedo family.”

For their decades of passionate service to the faith and the broader community, Veronica and Ruben are receiving their recognition this evening. 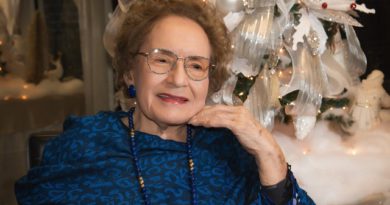 Statement of Archbishop Gustavo García-Siller, MSpS, regarding the death of Mary Jimenez