It was wall-to-wall good will at the 17th annual Catholic-Jewish Hanukkah celebration at San Fernando Cathedral Hall on Dec.6. “I think this is the year we’ve had the most people,” said Father Victor Valdez, rector of the cathedral, in his welcome, describing the event as not only about dialogue and listening to one another, but witnessing the greatness of God. Harry H. Levy IV, chair of the Jewish Federation of San Antonio, noted it was a testament to the community “that the two faiths can and do work together in harmony on many issues that can cause others to walk in different directions.”

A Hanukkah song by the Providence High School Choir under Elaine Bir’s direction preceded a blessing by Archbishop Gustavo García-Síller, MSpS. “Your pain is our pain,” he said to the Jewish members of the audience, referring to the tragic shooting at a Pittsburgh synagogue earlier that year and invoking God’s mercy and healing on all involved. “We thank you,” he prayed, “that as Catholics and Jews, we can come together as friends in faith, children of your covenant of love, to be your living presence in the world.”

Following the meal, Rabbi Emeritus Samuel Stahl (Temple Beth-El) recognized the many leaders of both faith traditions present, including Father David Garcia, a co-founder of the event. Stahl praised the strong Catholic-Jewish relationship in San Antonio, which pre-dated Vatican II and was highly irregular at the time, adding that the two faiths share a founding year locally. Temple Beth-El, the city’s oldest Jewish congregation, and the Diocese of San Antonio were both founded in 1874.

Auxiliary Bishop Michael Boulette, introduced guest speaker, Sister Mary Boys, SNJM, noted author, speaker and educator and currently professor of practical theology and dean of academic affairs at Union Theological Seminary. A member of the Committee on Religion, Ethics and the Holocaust at the U.S. Holocaust Memorial Museum in Washington, D.C., among her honors is the Sternberg Award from the International Council of Christians and Jews. “She has fundamentally reshaped favorably, not only Christian-Jewish dialogue,” said Bishop Boulette, “but also the scholarship of learning in multi-faith context across myriad traditions.”

Sister Boys noted that although the eight-day holiday of Hanukkah and four-week liturgical season of Advent carry different meanings, they have a connection in the lights of the menorah and Advent wreath. A menorah stood in the Temple of Solomon which was defiled and plundered in the second century BCE by Antiochus Epiphanes, who sought to destroy Jewish life. Later, a Jewish group, the Maccabees, reclaimed the Temple, celebrating the rededication of the altar for eight days and establishing an annual Hanukkah observance of this joyful event.

The Talmud notes the importance of publicly displaying a menorah, she related, and this can included risk, recalling a 1993 anti-Semitic incident in Billings, Mont., when a brick was thrown through the window of a Jewish home displaying their menorah. In response, the Billings Gazette published an article in which members of religious faiths throughout the city asked residents to display a printed menorah picture in their windows, signifying their determination to live together in harmony and in support of the principle of religious liberty embodied in the First Amendment.

Hate crimes have risen 17 percent this year, she announced, including Islamophobia, xenophobia and racism, and we must consider how to be allies together against this and reclaim the spirit of our country. “How can the kind of harmony and good relationships we witness in this room today go out further?” she asked.

Advent is an important time in the Catholic liturgical season, she explained. It is not just a preparation for Christmas, but a time to deepen our longing for the world to be different from what it is, represented by weekly lighting of candles on the Advent wreath. “It seems to me, at this time in the history of our country,” she added, “it is especially important for all of us to intensify our expectations and our dedication to making the world different.”

She concluded by combining words from a Jewish siddur (prayer book) and a Catholic missal. “We gather in the early blackness and deep cold of winter solstice, finding warmth from each other, turning darkness to a time of light,” she read from the siddur, ending with a Catholic prayer invoking God to “hasten the advent of that day when the weapons of war shall be banished, our deeds of darkness cast off and all your scattered children gathered into one.”

Adding to this, Rabbi Stahl explained the Jews are neither a race nor a nationality and more than just a religion, with the great Rabbi Mordecai Kaplan defining Judaism as “a religious civilization.” The core of Jewish identity is religion, said Stahl, surrounded by various ethnic and folk rituals and practices, only one of which is religious, regarding Hanukkah.

Non-religious practices include eating latkes (potato pancakes) and sufganiyot (jelly doughnuts), playing with the dreidel and giving gifts, the latter due to proximity to Christmas. The sole religious practice is lighting the hanukkiah (the nine-branched Hanukkah menorah). He noted that when the Temple was rededicated by the Maccabees, a small vessel of oil with only enough to burn one day, instead, miraculously burned for eight days, establishing the eight days of candle-lighting for Hanukkah.

Cantor Berlin led the singing of Maoz Tzur/Rock of Ages, after which Rabbi David Komerofsky of Temple Chai offered the closing prayer. “Blessed was each of us in coming here today to celebrate friendship and warmth,” he said. “Blessed may each of us be in going forth to spread kindness and light.” 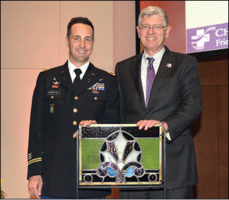 Event seeks to empower and support non-traditional students to succeed